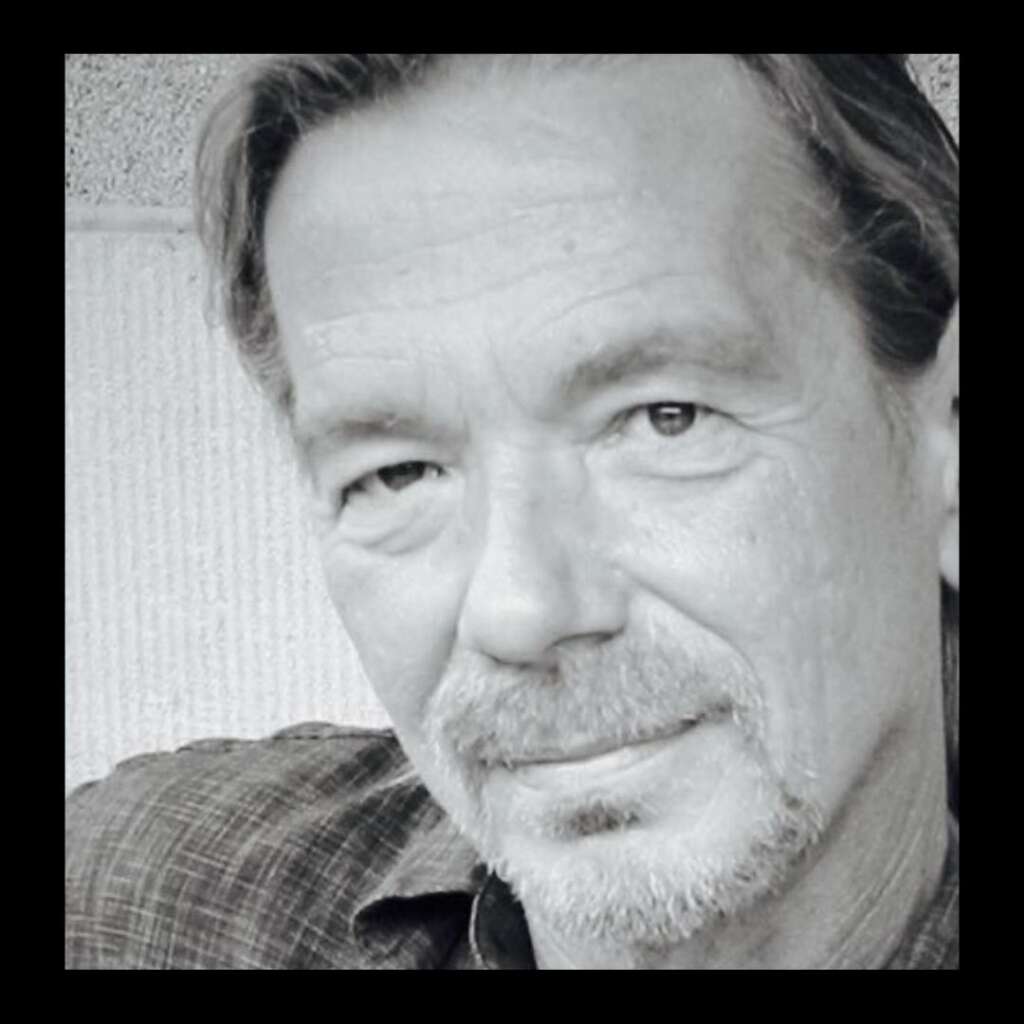 Rusty Salling, one of Gainesville’s greatest and best loved talents, took his final bow early Sunday morning, June 12, after bravely and fiercely battling cancer for more than a year. Rusty graced the stage of the Hippodrome Theatre from its earliest years, wowing audiences with some of the best performances in the theatre’s history. Rusty starred or was featured in 99 Mainstage plays from 1973 on, and was the author and guide of the Hippodrome’s legendary Ghost Tour, but was best known for his brilliant portrayal of Ebenezer Scrooge in the Hippodrome’s annual production of “A Christmas Carol.” From the first offering of the show in 1978 to his last performance in December 2014, Rusty brought joy to thousands of theatre patrons. He initially played Bob Cratchett, but for more than 25 years his Scrooge was the face of the holiday season for countless loyal fans.

Rusty was smart, kind, and extremely loyal. He worked so tirelessly for the Hippodrome that he had to be forced to take time off, and even then he would never refuse to take phone calls from colleagues in need. He would do anything for anyone and would do it well. For years he ran the box office, and when that ceased to offer him enough of a challenge he became the Information Systems Director for the theatre. With the help of interns, which he supervised with paternal patience, he devised, designed and ran the entire computer network for the theatre. He designed and operated the website and performed countless other tasks, never giving up until a solution was found to the problem at hand.

Rusty was born in Wilmington, North Carolina on October 17, 1948. His family moved to Jacksonville when he was a teenager, and he left to attend the University of Florida in the late 1960s. English was his major, but he soon discovered the theatre department and developed a passion for the stage that never faded. He fell in love with Gainesville and lived there for the rest of his life except for a life-broadening three-year stay in Manhattan in the mid-70s. After college, Rusty joined with friends in forming a theatre touring company known as Bacchus Productions. The most significant piece performed by that company was a year-long tour of “Waiting for Godot” throughout the southeastern United States. Rusty mesmerized audiences, including the inmates of 12 Florida prisons, with his enchanting performance. After Bacchus, Rusty moved to New York and then back to Gainesville in 1978 to join the Hippodrome, where he remained dedicated to the theatre for the rest of his life, becoming an icon in the cultural history of the city. 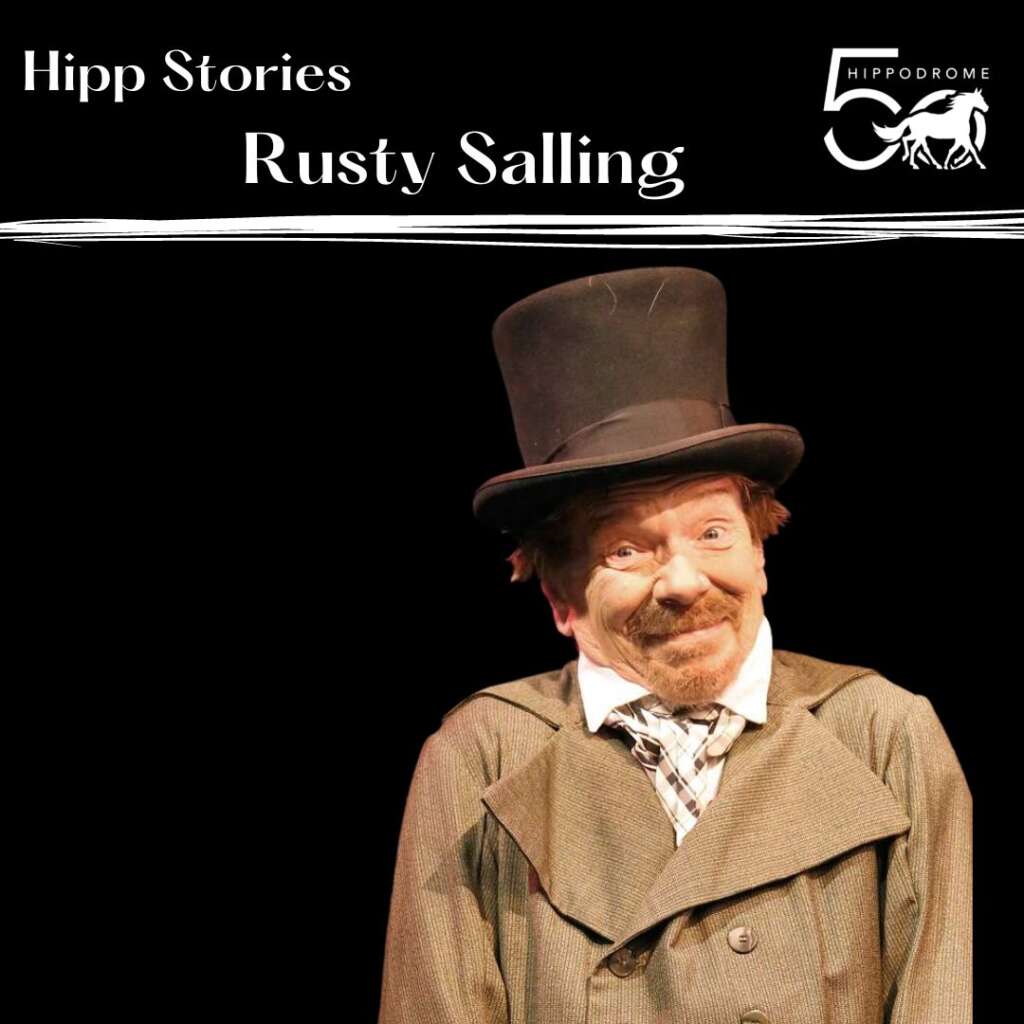 “I first met Rusty during my first show at the Hippodrome as a freelance actress. The show was TALK RADIO by Eric Bogosian. I was very nervous walking into a rehearsal process where everyone knew each other. Well, Rusty did not speak to me. He did not say a word to me during the entire rehearsal or performances. He did make a reference about me during rehearsal when I brought flavored coffee for the rehearsal. He took one sip and asked who brought the coffee. I confessed. He just said, under his breath…..we drink plain coffee here. Not flavored.”

” That was it. I was officially scared of him. Time goes on and we completed the run of the show. Not even a grunt from Rusty the whole time. On our closing night, I left the building the same time Rusty left….as we walked to our cars, he said…..GREAT JOB and kept walking. I could not believe it.  Of course, Rusty and I became great friends and created many stories together throughout the years. I really loved him so much.”

"They were real pals and if Buddy was at the Hipp, he was with Rusty. "

“I had a Silky Terrier named Shakespeare but I called him Buddy. He was my Angel.

Buddy did not like men. Approached by a man and he went wild with barking and growling.  Perhaps he had been abused by a man as a pup. Then, he met Rusty. Rusty walked into my office and Buddy was with me at work. When he saw Rusty, he wagged his tail and rolled over on his back hoping for tummy rubs. Rusty picked him up and got a face full of kisses. I was gobsmacked. Rusty fell in love with Buddy. He would take him to his own office and lay him on his desk while he worked. They were real pals and if Buddy was at the Hipp, he was with Rusty. “ 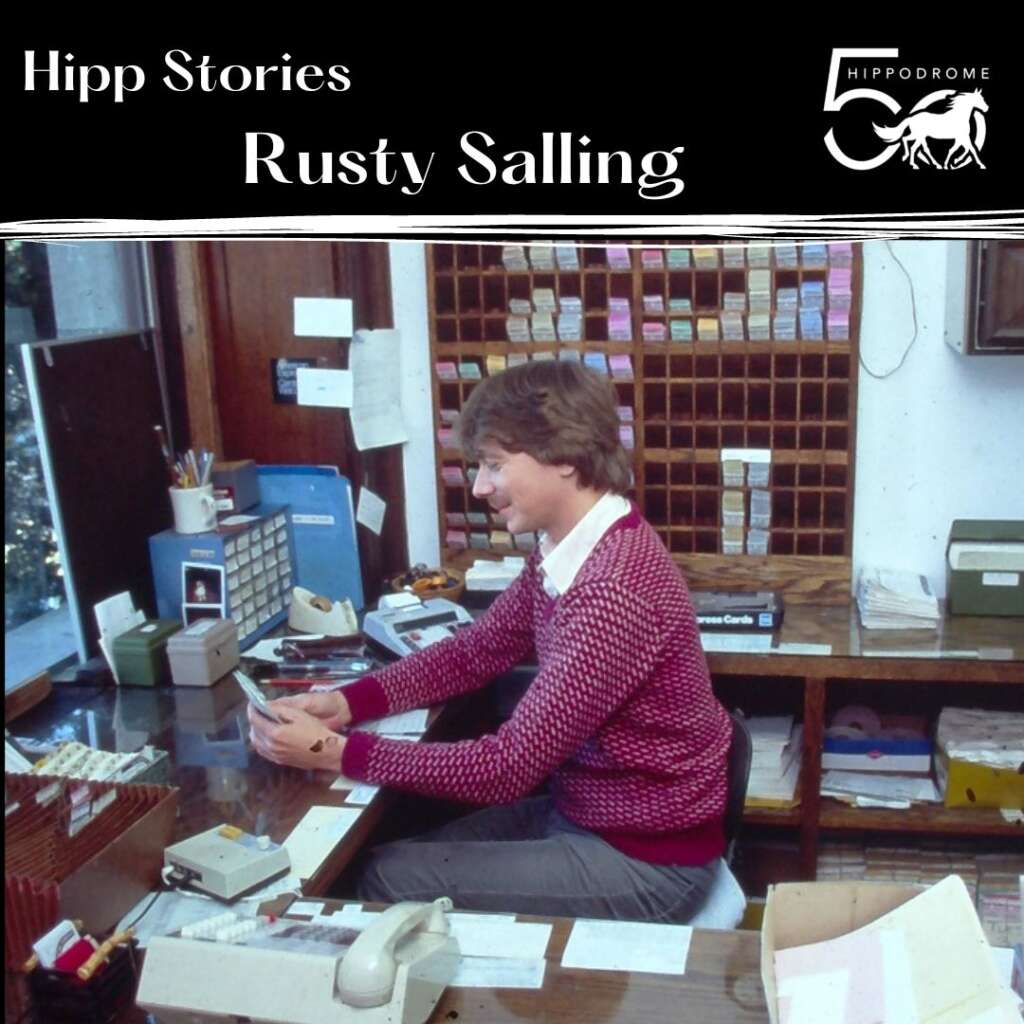 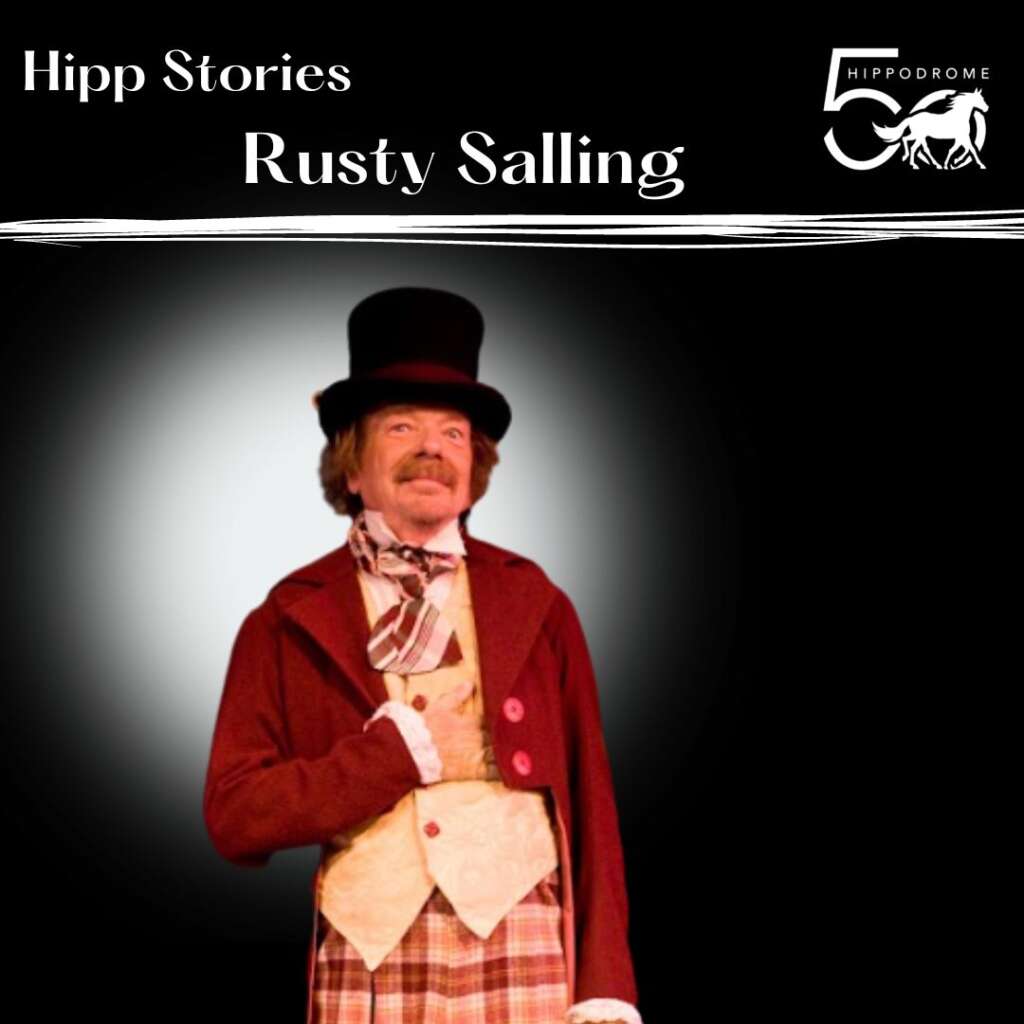 "Rusty gave a prickly humbug persona in life but his compassion and understanding of the human spirit was what made him a legendary actor."

“Rusty and Dan and Ken Peterson in THE CARETAKER the first season at the Hippodrome. All 3 actors gave stellar performances. As a young actor I was mesmerized by their depth.”

“Rusty always gave a memorable performance. BOYS NEXT DOOR, Bob Crachit in A CHRISTMAS CAROL, THE DRESSER, were roles that allowed Rusty to show vulnerability.

Of course he was a master at comedy, like his role in RUMORS.” 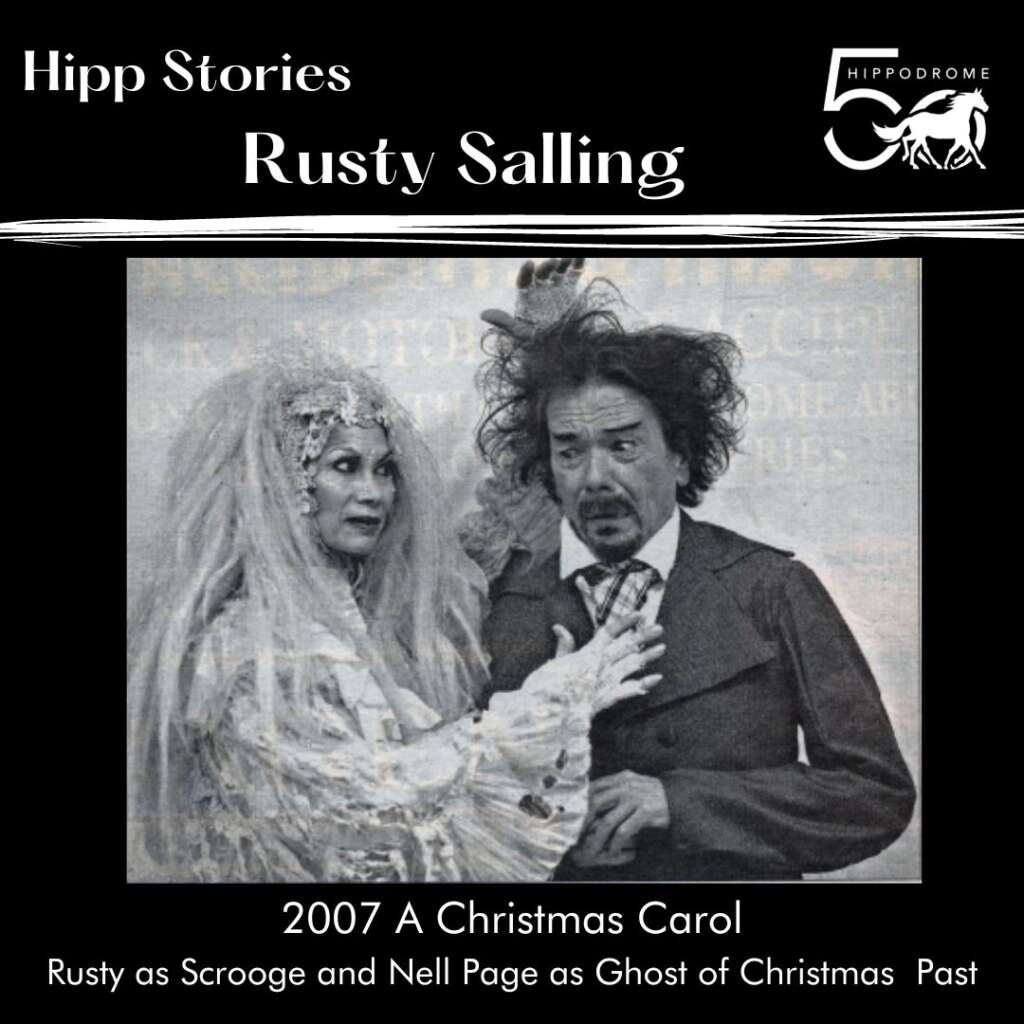 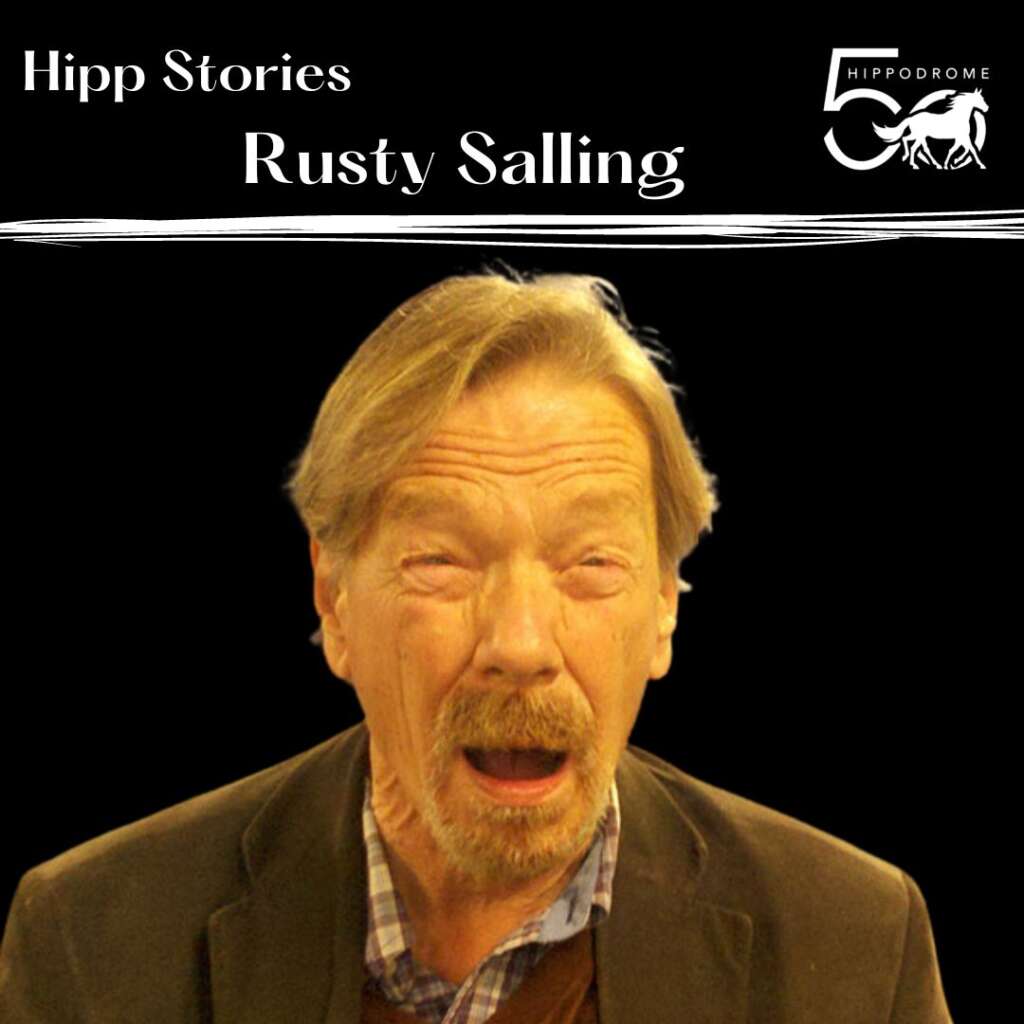 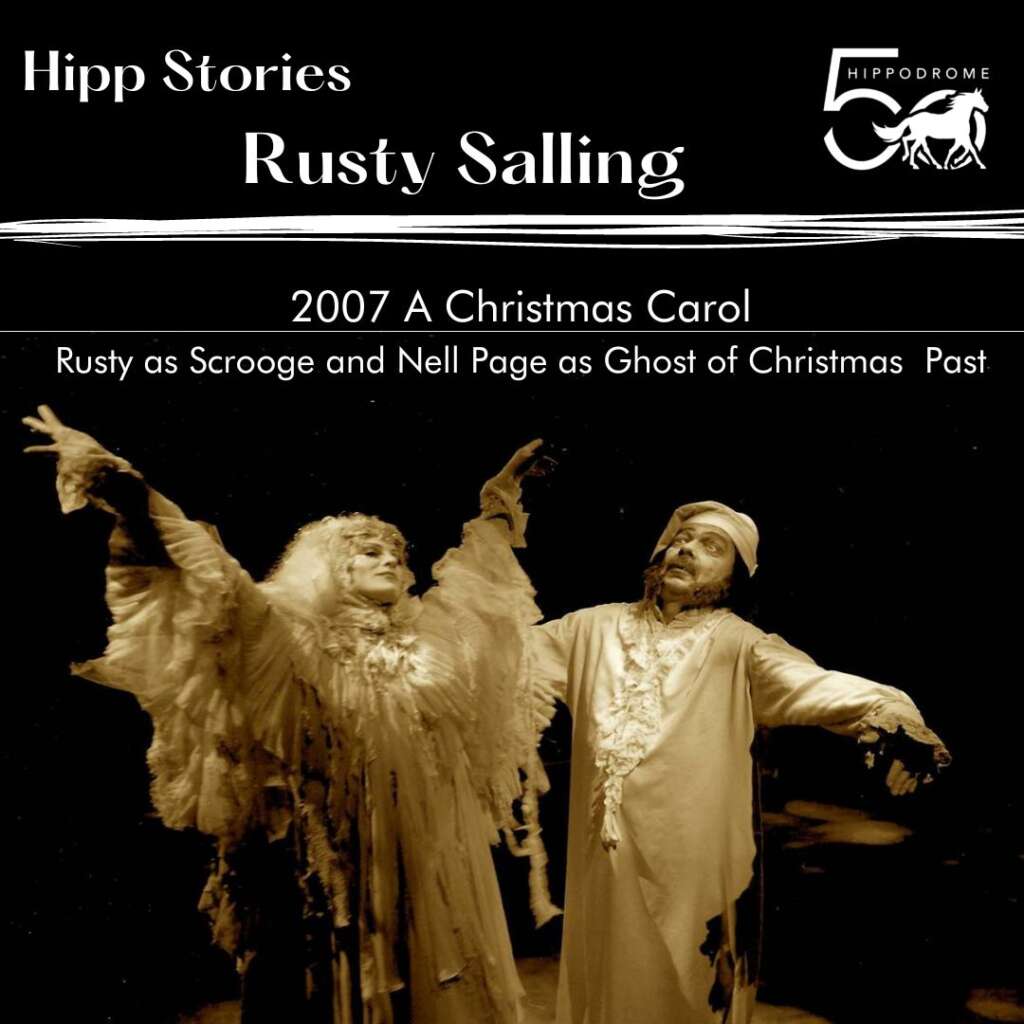 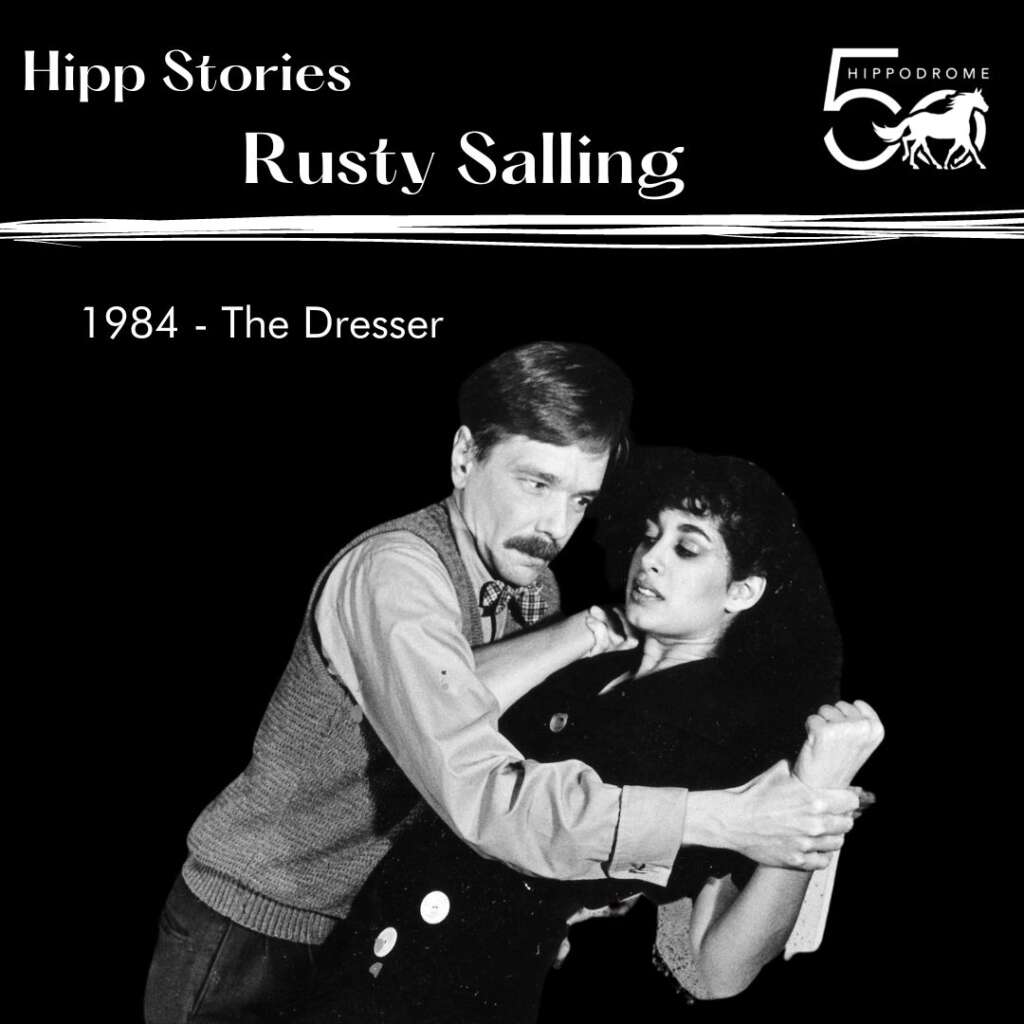 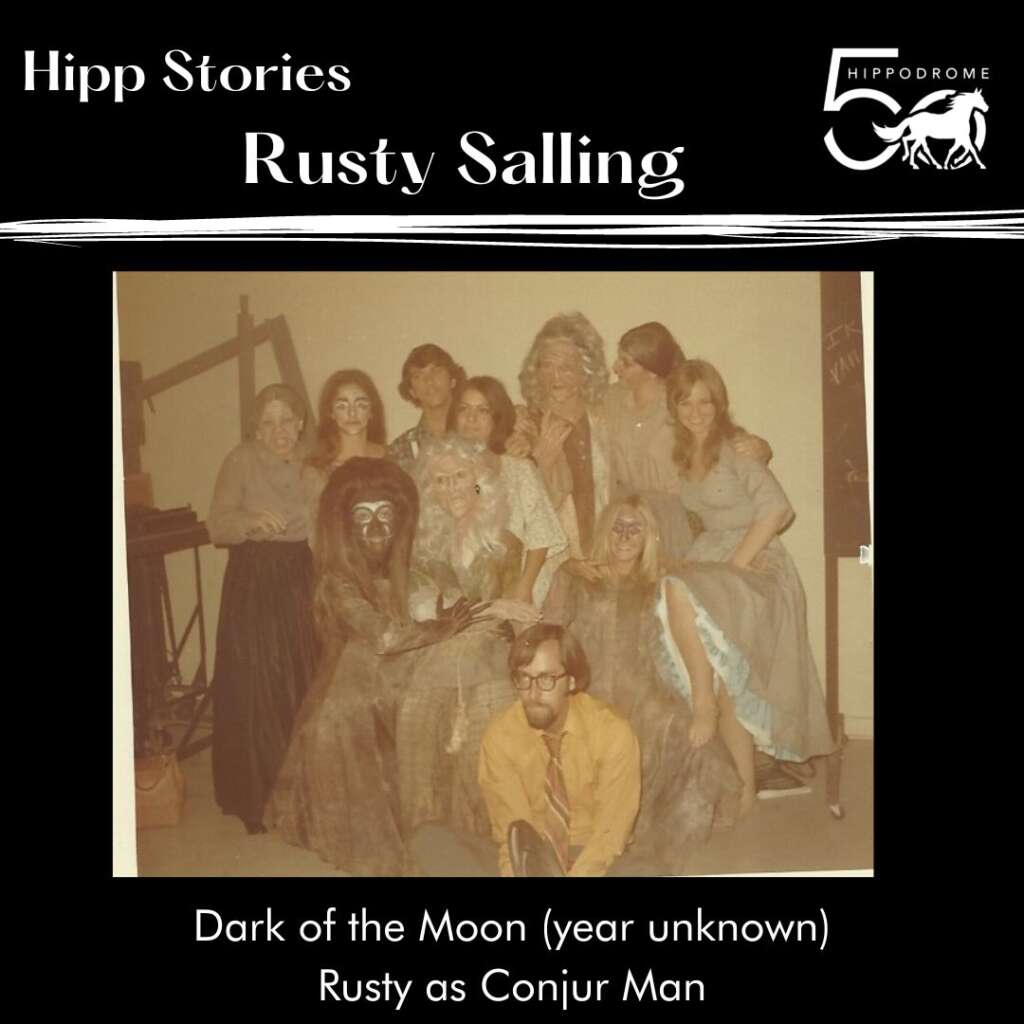