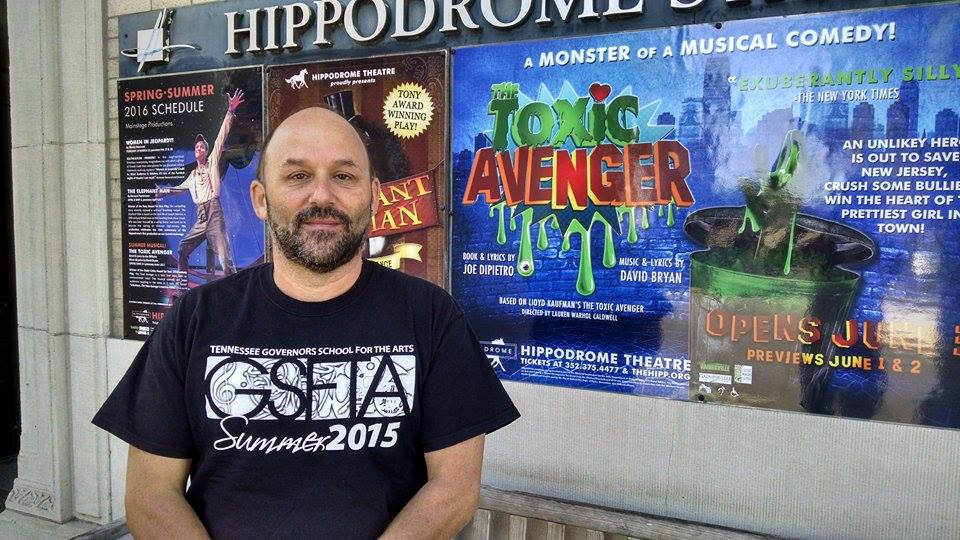 Standing in the spotlight can be thrilling, nerve wracking, an adrenaline rush, but standing behind the spotlight, can be just as fascinating.

You may not know Bob or give him a standing ovation on a Saturday night, but you have seen his work scattered across Gainesville for the last 35 years.

Bob lives by an organic process, and it’s one of the reasons he fell in love with the Hippodrome 31 years ago.

Bob asks himself, “How can I help shape the director’s vision? How does lighting help create the story?”

“Before designing the lighting, the physical world has to be created; the costumes, the set, the props. I let everyone else create the world first, and then I illuminate it,” says Bob.

For The Elephant Man, he looked at what the play was trying to convey to the audience. Joseph Merrick lived in a sterile world and was restricted by his deformity. Everyone saw him as an outcast and Bob captured that through the lighting.

“Merrick had a harsh, sharp existence. He was always on display and my lighting design goes along with those themes,” he said. “I use bright light and effects that sculpt the actor’s bodies since there is a simple set.”

Bob said capturing the actor’s voice and the story was his main goal and the design was about restrain.

The first step to designing light for a show is to create a light plot, which is similar to an architectural blueprint. After a technical dress rehearsal, he picks and chooses every light and configures them. There‘s a lot of algebra and geometry that goes into this and no two shows are ever the same at the Hippodrome.

The next step is sending the information to Jed Daniels, the Hipp’s Master Electrician, and people come to set all the lights in place. A Hipp show can utilize up to 150 light bulbs, and each one takes anywhere from three to 10 minutes to set up.

“Every blub has to be touched, and since every show is different, it can take a good amount of time to get them just how I want them,” says Bob.

Bob’s love of theatre started when he was a little kid who enjoyed acting. His passion later turned to behind the scenes when he was a teenager.

“I walked into my high school auditorium and saw all the really cool lights. I thought to myself, I could do that,” he said.

He pursued a theatre production degree from the University of Florida, and before he could even graduate, he had a job at the Hippodrome Theatre.

He ran spotlight for the 1981 Hipp production of The Revenge of the Space Pandas.

35 years later, Bob still has a love for his life career.

So the next time you’re standing in the Hippodrome audience, take a second and look up.