The arts of storytelling and basket making weaved into one class for adults comes to the Hippodrome Theatre on Monday, Oct. 29! This series is on Mondays from Oct. 29 to Dec. 3, 6:15 p.m. to 7:30 p.m.
Participants in this 6-part series will explore the oral tradition of storytelling while learning the art of basket-making. Class participants will work with seasoned storyteller and comedian Daniel Perea to harness their natural storytelling abilities while learning the art of Appalachian potato basket-weaving with visual artist Justine Henry. Toward the end of the series, students will perform a story and present a potato basket of their making.

LET THE RIGHT ONE IN

Let the Right One In by Jack Thorne, based on the novel by John Ajvide Lindqvist and directed by Lauren Warhol Caldwell, is onstage at the Hippodrome Theatre in Gainesville, Fla., through November 4, 2018. Let the Right One In is a movement-filled horror tale of young-love, living scene to scene with as many cute and endearing moments as ones that brim with blood.

They wrote “Our neighbors at the Hippodrome Theatre are being impacted by budget cuts from the Florida state legislature, decimating funding for cultural grants. Thanks to these cuts, Florida now has the dubious honor of being ranked 48th in the nation for funding for the arts, as the total investment represents just 0.003 percent of the Florida budget.”

The Paramount Grill announces the launch of “HIPP TUESDAYS” in response to the Hippodrome Theatre’s state funding cuts.
Chef and Owner of the Paramount Grill, Clif Nelson announced that the Paramount will donate 10% of gross receipts from all Tuesday sales to the Hippodrome Theatre starting on July 17 and extending for one year.
Mr. Nelson said,“I was shocked when I first heard the news that the Hippodrome’s state funding had been so drastically cut. I knew I needed to find a way to help.”
Starting on Tuesday, July 17, 10% of gross receipts from both lunch and dinner service at the Paramount Grill will be donated to the Hippodrome. In return, customers who dine at Paramount on “HIPP TUESDAYS” can bring their receipt to the Hippodrome box office and receive a customized notebook with a beautiful Hippodrome painting by Margaret Tolbert.
For over 30 years Clif Nelson, Chef/Owner of Paramount Grill, has been serving unique and innovative cuisine in Gainesville. The Paramount Grill opened in August 2001 and serves fresh, inventive cuisine, coupled with a relaxed, unpretentious atmosphere in the heart of downtown Gainesville.
Over the past 45 years, the Hippodrome has been steadfast in its commitment to inclusion, diversity and acceptance. Exploring shared humanity and tackling tough questions through the arts has been at the core of its mission, and  it has never been more important than now.

Gainesville theatre artists exhibited their talent to a sold out house at the Hippodrome Theatre on Sunday for the 24 Hour Play Project, a Hippodrome Company Member Project created by Stephanie Lynge. Local playwrights had a night to write, before diving into rehearsal the next morning on Sunday, June 10, with their directors and actors. Despite the time constraints, their words shined light on such topics as the importance of listening, tyrannical apocalypse, LGBTQ themes, growth under duress, mental illness, nature and family in a stage production of 8 diverse plays.

This project integrated artists from across the Gainesville community, including the University of Florida School of Theatre + Dance, Acrosstown Repertory Theatre, Actors’ Warehouse, Gainesville Community Playhouse, Santa Fe College Theatre Department and the Hippodrome Theatre, and the actors ranged in age from a middle school student to actors in their 50s and 60s. The previous night, the playwright picked their director at random, along with their cast size and gender ratio of the actors.

The project opened with Esteban Alvarez III’s play “What’s Up, Doc?” — a comedic hit in which a patient with suspected STDs and a patient with a sprained toe were confused, and the med student gave switched care advice accordingly. The cast starred Bill Eissler, Rachel Jones, Laura Palacio and Kareena Wallace.”Exist, Pursued by a Bear,” a play on a famous stage direction in “The Winter’s Tale”, came from from the Shakespeare-inclined mind of Chuck Lipsig, naturally. The bear’s entrance was a crowd-pleaser, indeed. The play was directed by Matt Lindsay and starred Bryan Cespedes, Ruth King, Megan Poole, and Amei Soleyn.

“My Pear Lady,” written by Sloane Henry and directed by Lola Bond explored the significance in recognizing things for what they are – not what they are not, through the premise of fostering a plant after the death of a beloved pet, Pickle. Meanwhile, dog up for adoption was nearly euthanized. Fortunately the significant other to the protagonist adopted him in time, and he could be loved for who he was — not for not being Pickle. “My Pear Lady” starred Rowan Housden, Kristina Johnson and Katie Pankow.

Channing O’Halloran, 16, nearly stole the show with her role in “The Lydia Effect” by Jane Arrowsmith Edwards with her line, that also worked for fulfilling the required Tony’s reference, “I’m sorry you have cancer but you have a better chance of recovery than becoming a Broadway actor.” The show was directed by Susan Christophy and also starred Quil Cauchon, Daniel Perea and Katryna Richter.

One play even verged on exiting the atmosphere, as in Gregg Jones’s “Genesis Recall,”–  “Actually he is not my father. And I am an alien.” Directed by Gabrielle Byam and starring Aryana Himle, Lizzy Lance, Mandy Fugate and Carly Rubin.

“Rolling on a River” by Deborah Dickey, had a theme of overcoming fear in more ways than one — with one character’s fear of the river, or anything really, and the other woman’s fear that the boy-in-question didn’t like the her back. The play was directed by Mikell Pinkney and starred Amanda Edwards, Adam Lishawa and Kate Osborn.

Charlie Mitchell’s “Rom-Com” took a lighter perspective with some break-up zingers, “I haven’t been with a lot of guys but I’m pretty sure you’re not very good at sex,” and “If you wrote the kamasutra, it would be a pamphlet,” and probably the mosts brutal– Woman: “I told you I loved you.” Man: “I didn’t.” The play, directed by David Young and starring Kayla Caslow, Ethan Ellis, Kaitie Graves and Harold Kennedy, lightened up as the break up passed with lines such as, “Am I the gay friend? … Girl you better wash that man right outta your hair!”

Responding the success of the project, Lynge said, “The Hippodrome has always been supportive of new work and this seemed like the perfect opportunity to bring together all of the community of Gainesville.  We have a wonderful, amazing theatrical energy in the center of Gainesville, we couldn’t have done it without every single solitary group that joined us — absolutely everyone was represented and we could not be prouder of bringing everyone together, especially at a time like this when the state has cut support for the arts. We could not be prouder of all the work from everyone, from every theatrical group here in Gainesville, and we look forward to being able to do it again.”

Stephanie Lynge and Cameron Pfahler were the producers, Neil Bearden was the technical director, Earl McKee was the stage manager, Franka Perez was the assistant stage manager and Laura McNeill was the production assistant for the 24 Hour Play Project.

“What I like about this play is the conflict is unique. Its not about domestic conflict completely. It’s obviously about the conflict of Hell, but inside of that there’s so much,” said Lauren Warhol Caldwell, Director of “The Christians” and Artistic Director of the Hippodrome Theatre. “The main thing I like about it is that there are no answers.”

The Christians is a critically-acclaimed drama by award-winning playwright Lucas Hnath. Currently one of the most-produced plays in the nation, The Christians is a thought-provoking and timely play which poses philosophical and theological questions about faith in America. The Hippodrome Theatre had a talkback Sunday after the 2 p.m. show with the director and the cast to continue the conversation with the audience members.

“I hope if 10 people walk out and I ask them how it was, I get 10 different answers,” Caldwell said.

The Christians centers around Pastor Paul, who started a church in a modest storefront. Over the past 10 years, he grew it into a mega-church with thousands of devoted parishioners and a newly paid-off mortgage. Everything changes one Sunday when Pastor Paul preaches a divisive sermon that shakes his congregation to the core. The Christians is both epic and unexpectedly intimate, an unflinching look at religious faith in America – and its power to unite or divide.

When asked if “The Christians” is the same play it was on opening night, Warhol said, “Tonight’s show had a texture, richness, a pace that I dreamed about, the play was different. There’s a growth that happened. I commend them[the actors] and the Stage Manager [Amber Wilkerson] for allowing that growth.”

Renata Eastlick says the play comprises and struggles with, “how to be a good, kind and responsible community of people who love each other.” As in any play, each person who sees “The Christians” will have a different visceral reaction to it, Eastlick said.

An audience member said that there is a healthiness about the play — because of the respect the characters have for each other.

“The fact that we’re all here, having this conversation, is optimistic,” one audience member pointed out.

Jacaré Choro presents “Terra Brasilis: Reimagining Early Music in Modern Times” at the Hippodrome Theatre! Sunday, May 6, doors open at 6:30 p.m., and the music begins at 7:30. After the show, mingle with the musicians over the Brazilian drink special of the evening, Caipirinhas!
Jacaré Choro performs unique interpretations of Brazilian music through its creative arrangements and adaptations of genres to celebrate Brazil’s rich musical history.
For those already familiar with Brazilian music, we hope the rich harmonies, contoured melodies, and syncopated rhythms will evoke feelings of nostalgia, or as we say in Brazil: saudade. For newcomers, please allow us to share our love of Brazilian music with you!
See Vadim Arsky on saxophones, Tabajara Belo on guitar and mandolin, Aaron Colverson on violin, Larry Crook on percussion and Welson Tremura on guitar and voice!

Tickets are $10 seniors and students and $15 general public.

Spring Break Camp at the Hippodrome was so much fun! We had special guests, including the Barber Gators and Hula GAINESVILLE, workshops like costuming, and so much more!

The different age groups even created and performed their own rendition of Dr. Suess’s “The Lorax,” as you can see in the following links! 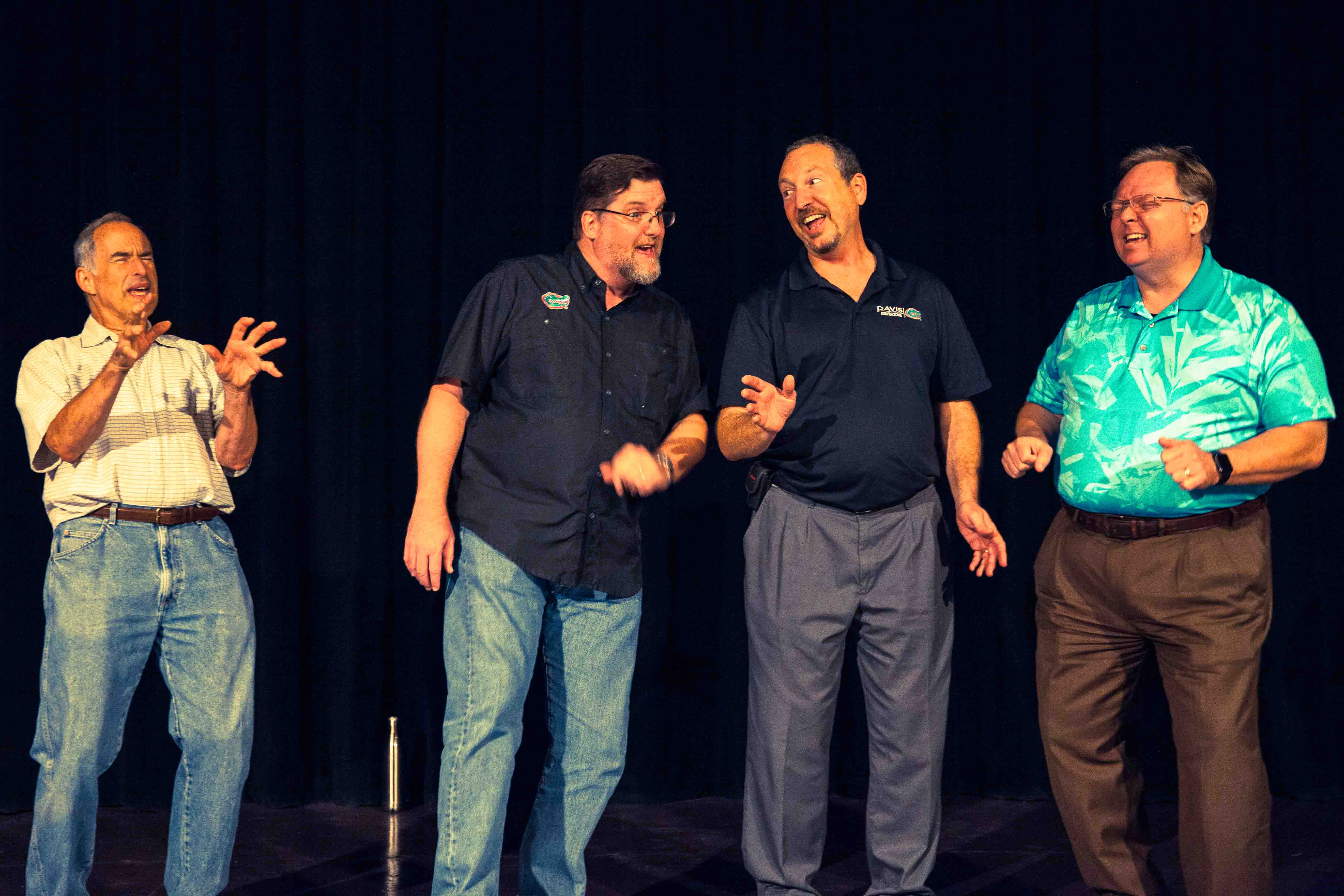 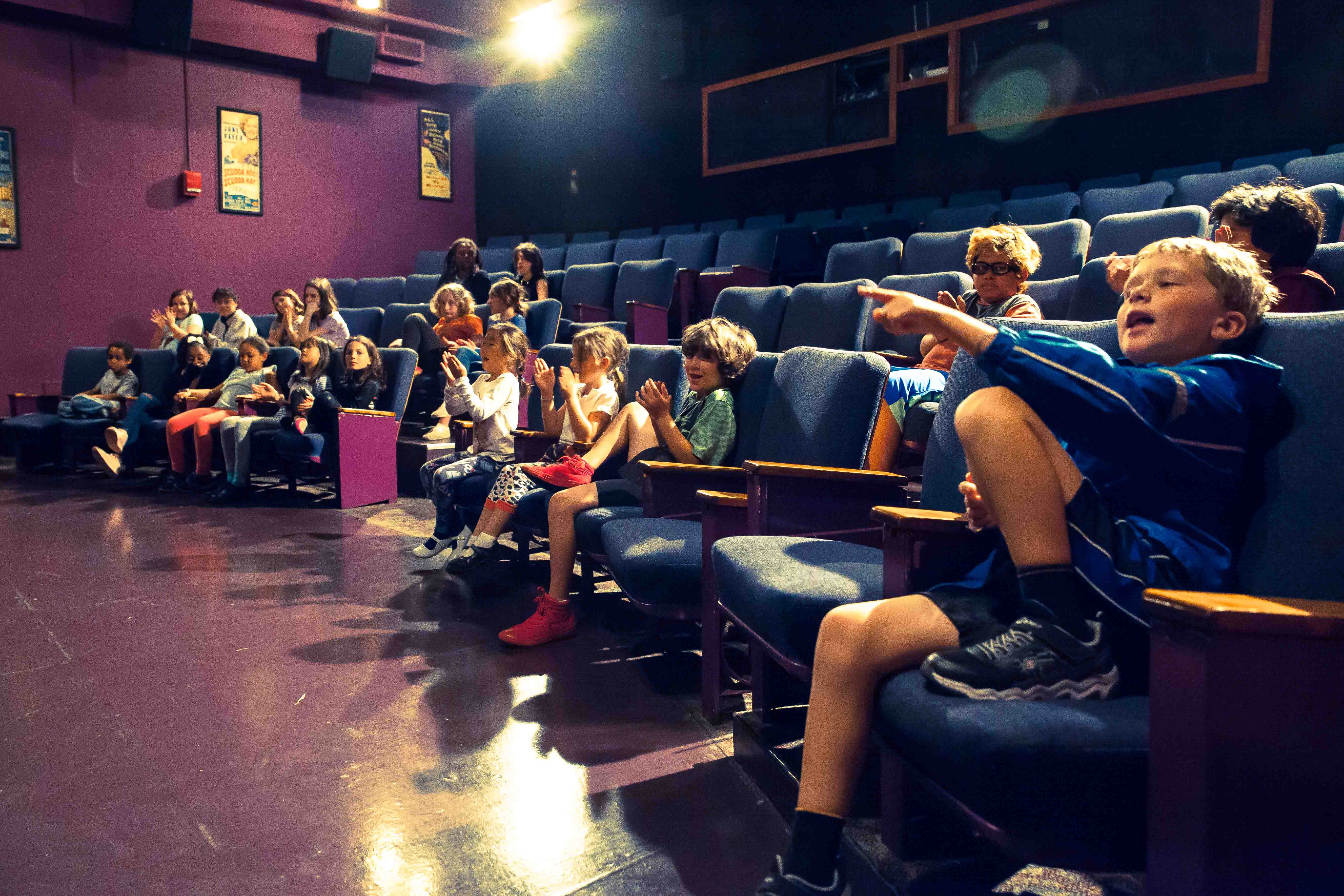 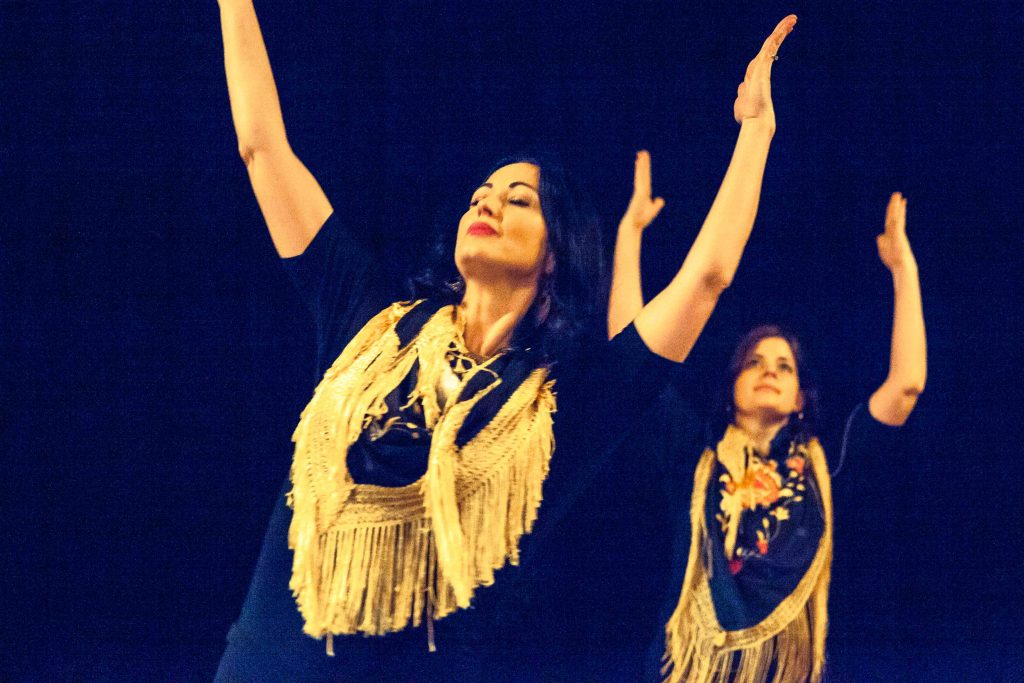 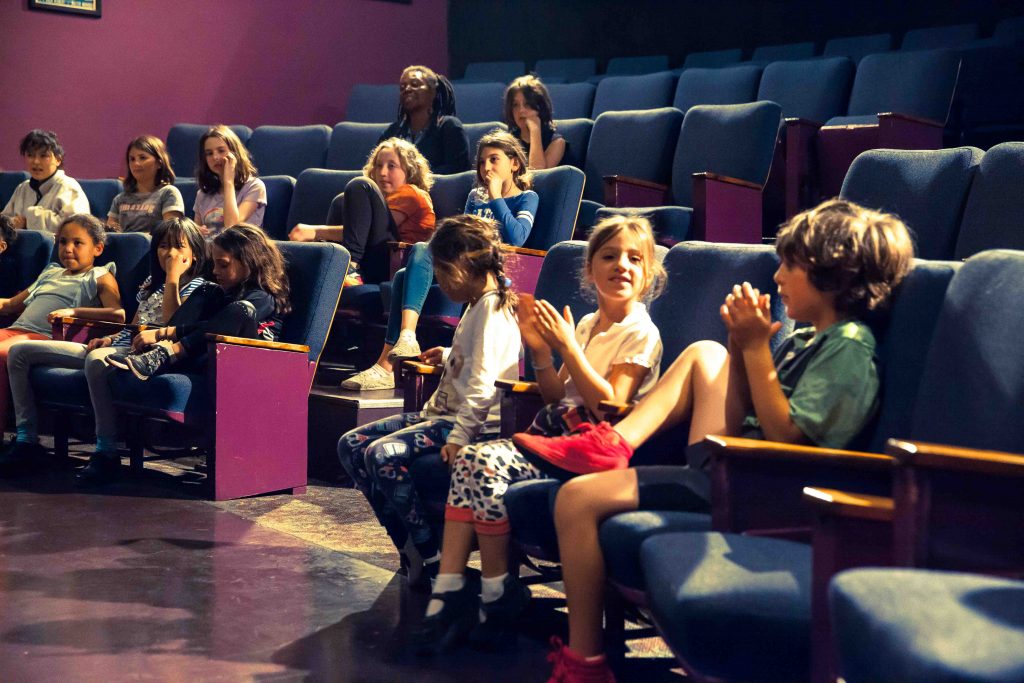 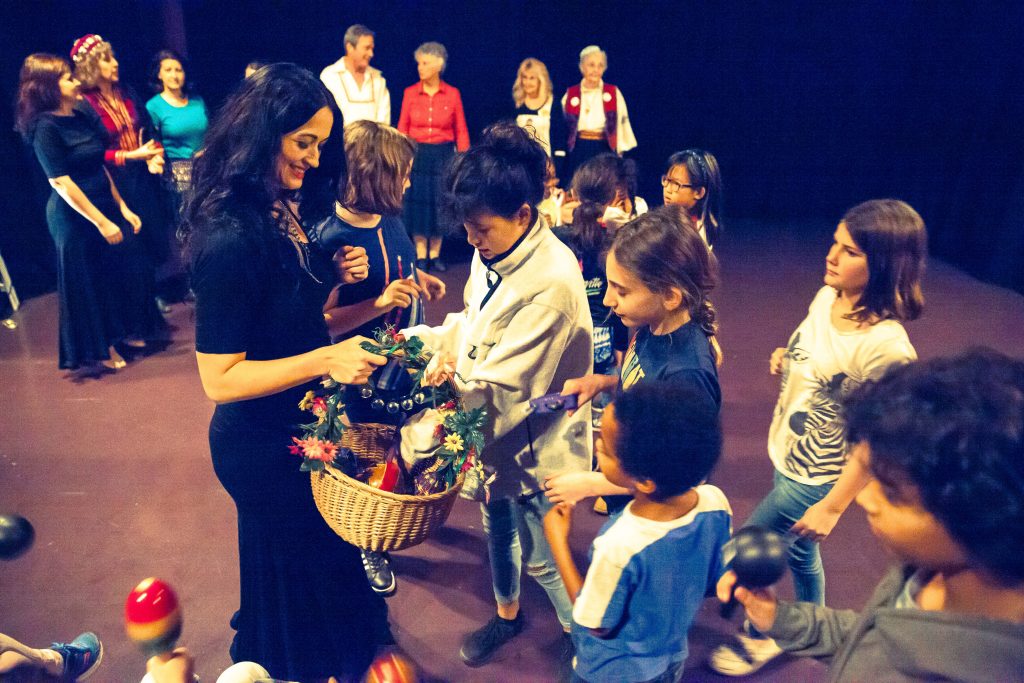 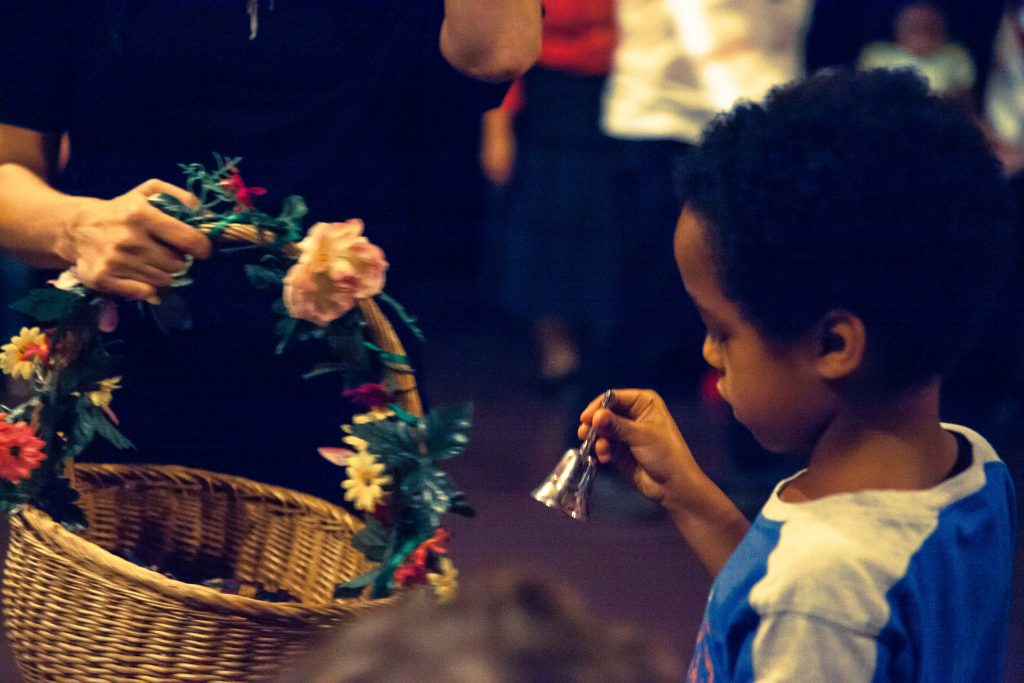 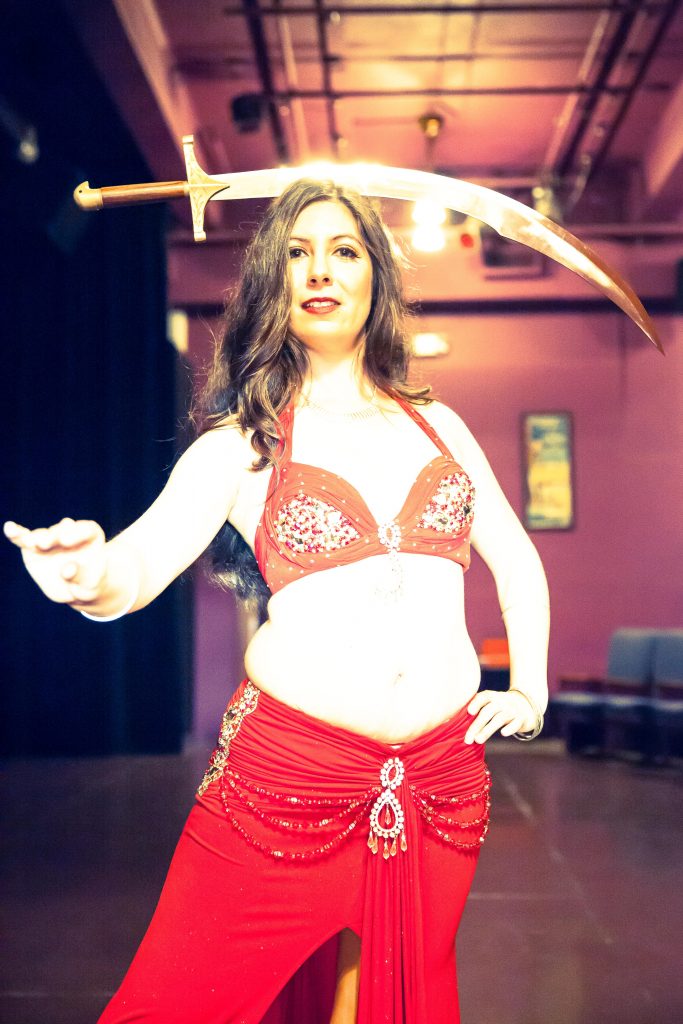 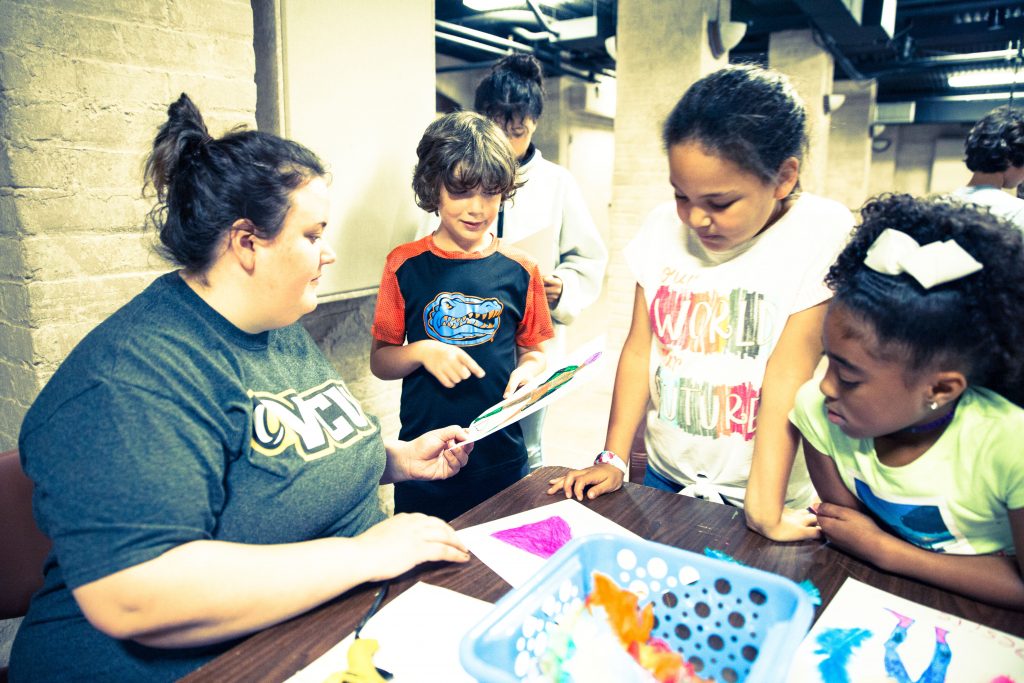 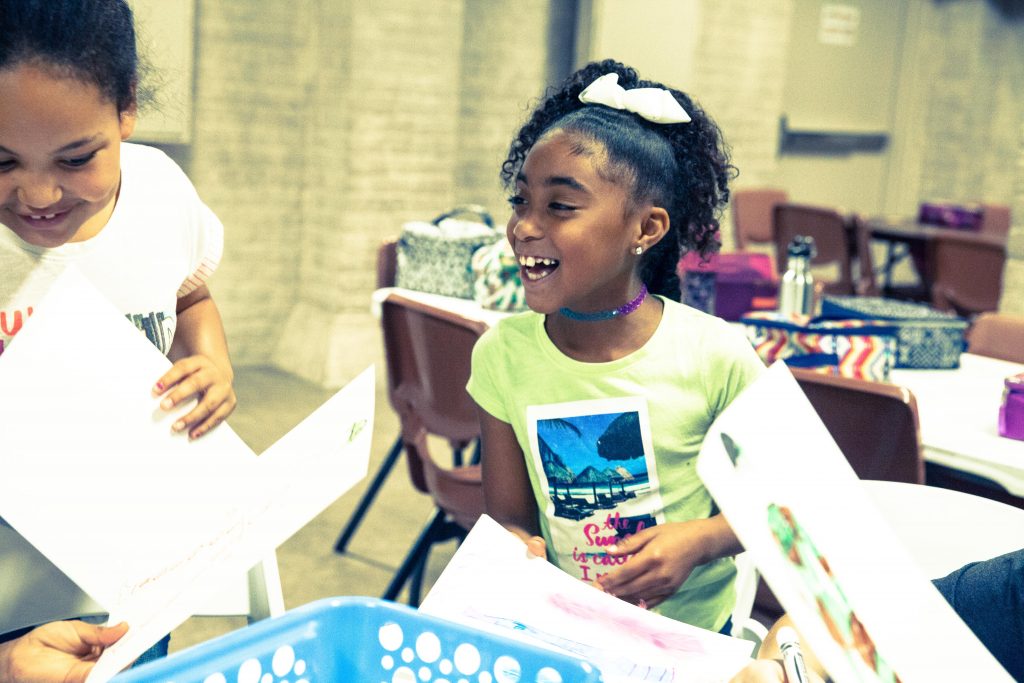 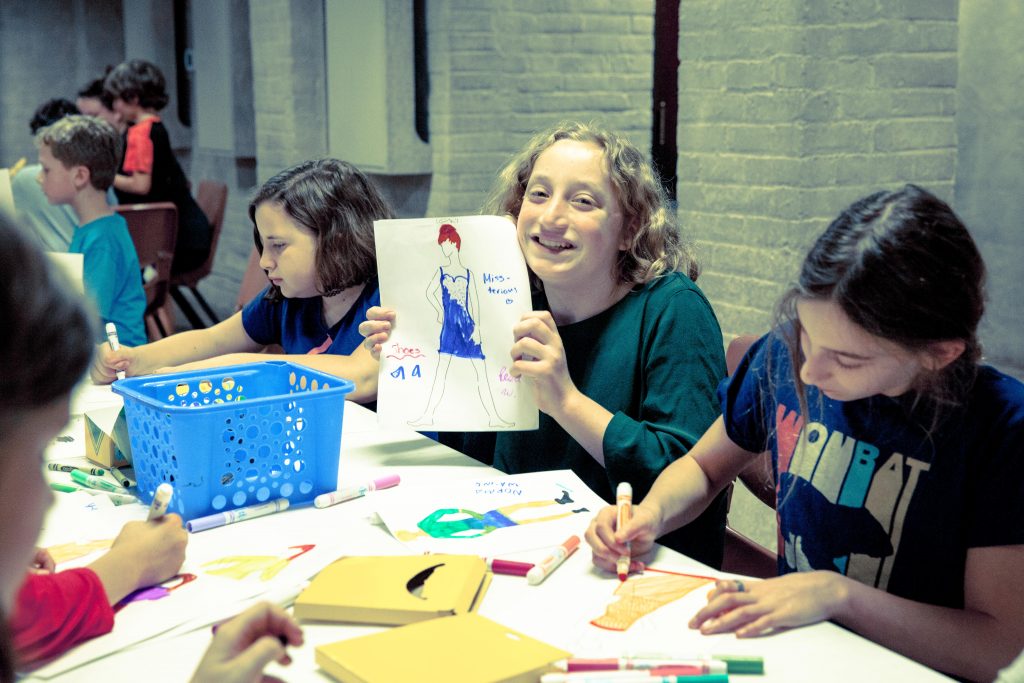 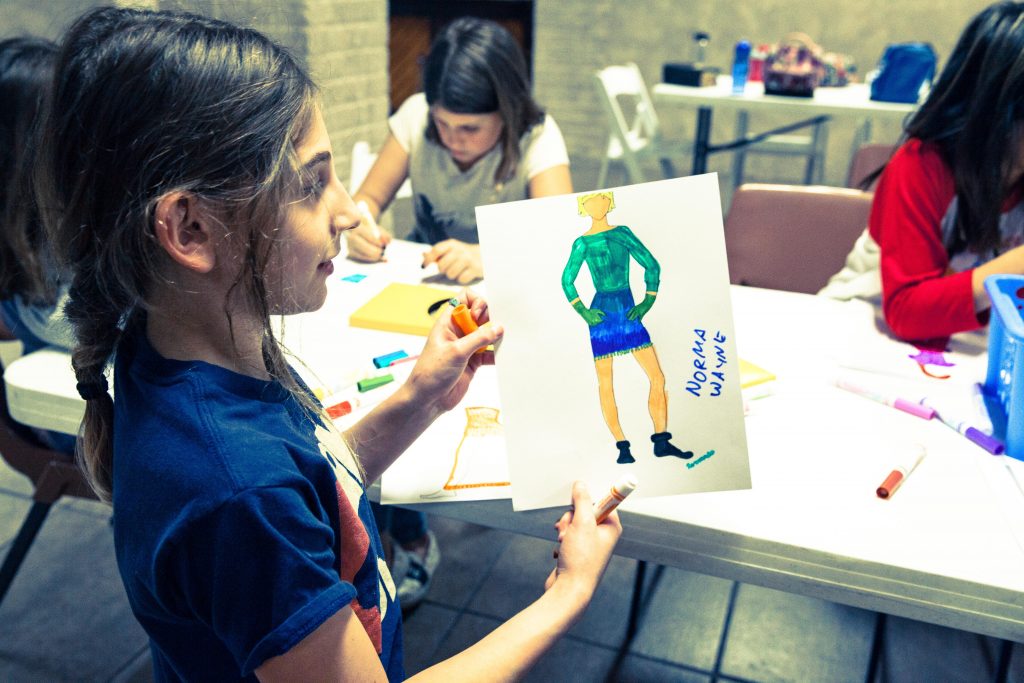 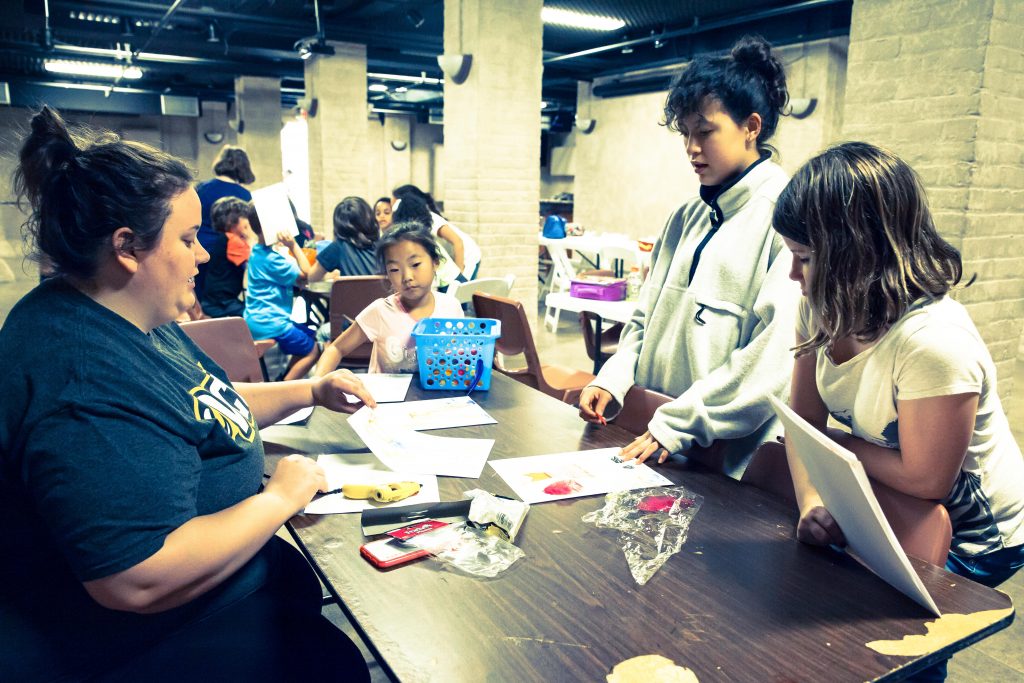 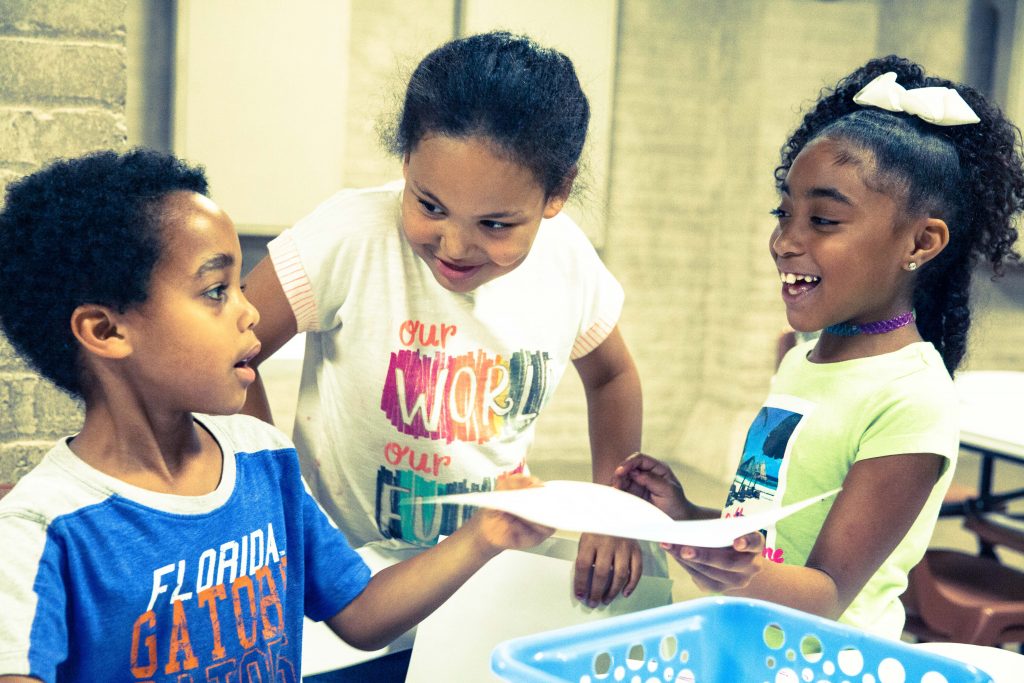 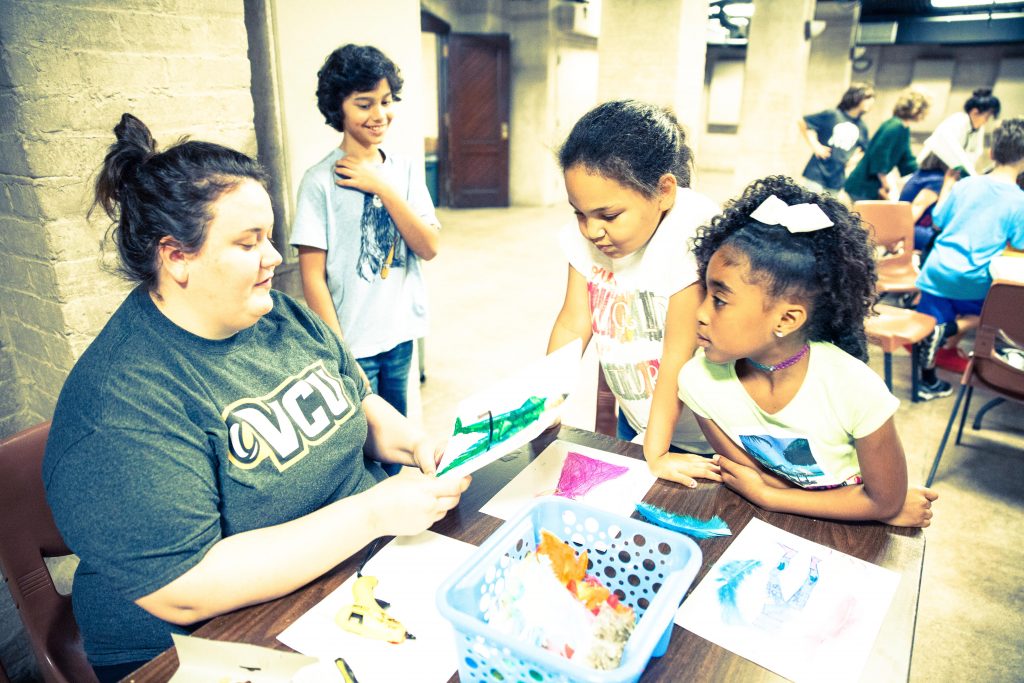